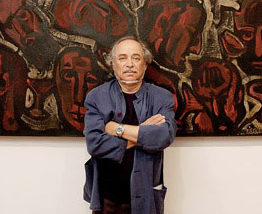 Mikhail Turovsky People's Artist of Ukraine Member of the Academy of Arts of Ukraine Biography Mikhail Turovsky was born on May 8, 1933 in Kiev, Ukraine (former USSR). This was the year of Hitler’s rise to power in Germany and the year of the strengthening of Stalin’s tyrannical reign in the USSR. These historical events influenced the subsequent fate of the artist. When the USSR entered World War II in June 1941 life was dramatically altered. His father voluntarily enlisted in the army and was killed shortly thereafter. His mother and her two sons fled Kiev, found themselves on German occupied territory, and miraculously escaped, making the grueling journey to Samarkand. The Leningrad Art School for Especially Gifted Children was also evacuated to Samarkand. Both Mikhail and his brother Anatoli were enrolled in the school in 1942. In 1945, after the war was over the family returned to Kiev. In 1946 Misha enrolled in the 5th grade of the Taras Shevchenko Art School in Kiev. In school he began to display extraordinary talent for drawing, receiving many awards. In those lean times these awards were comprised of pencils, paints and paintbrushes. In 1949 he was awarded first prize at the All-Ukrainian exhibition devoted to the 150th anniversary of the birth of Alexander Pushkin, for his watercolor “Mozart and Salieri”, based on the themes of Pushkin’s tragedy. The work was exhibited in the museum on the same wall as such masters of Russian art as Repin and Vrubel. He finished school in 1952. The next step in obtaining an art education was to be accepted by the Kiev Art Institute. He was rejected twice due to anti-Semitic policies in education. and, because of his perseverance and tenacity, was accepted on his third attempt. This occurred in 1954. He was graduated in 1960. From the beginning of his studies at the Institute he started to exhibit at Kiev and All-Ukrainian art exhibitions, later in All-Soviet exhibitions. In 1965 he was accepted for post-graduate study at the USSR Academy of Art, which he completed 1967. In this period Mikhail’s reputation as a master