New York City’s museums and galleries—and, often, its public spaces—are home to some of the most creative, inspiring art in the world. Below, find details on the top exhibitions in town as well as what’s coming soon.

With New York’s art scene being so prominent yet ever changing, you’ll want to be sure to catch significant shows. Time Out New York rounds up the top five art exhibitions of the week, from offerings at the best photography and art galleries in NYC to shows at renowned institutions like the Metropolitan Museum of Art, the Museum of Modern Art and the Guggenheim. 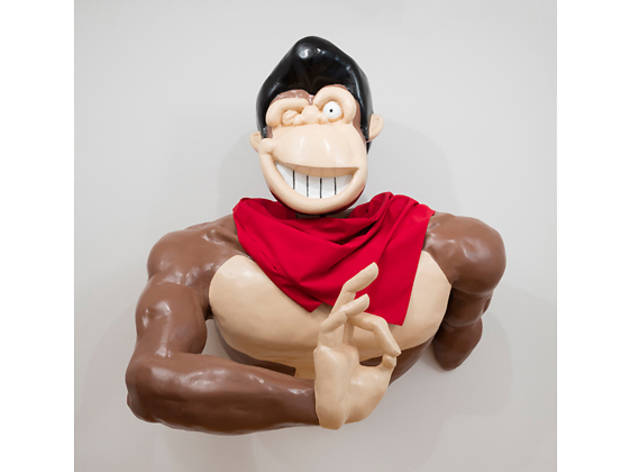 The objects making up the assemblages here suggest cultural fossils, recording the impact of time, history and culture to sardonic effect. 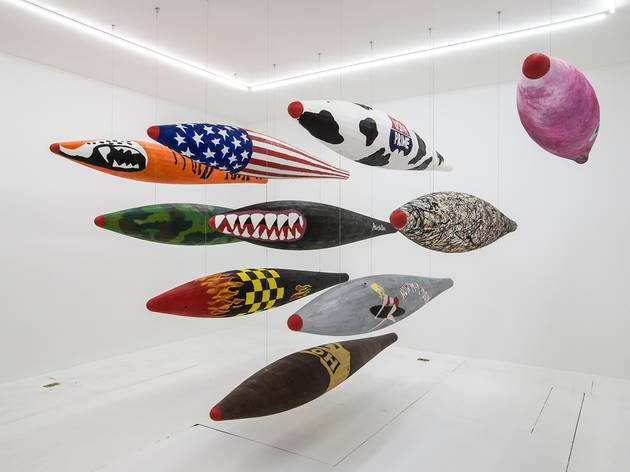 Weapons like bombs and the planes that deliver them are impersonal in the sense that they kill indiscriminately. But they’re often personalized with inscriptions or cartoons by the military personnel who use them (think of the nose art on World War II on bombers). The artist here explores this contradiction with customized “torpedoes,” including one painted to resemble a cigar and another painted like a Jackson Pollock. 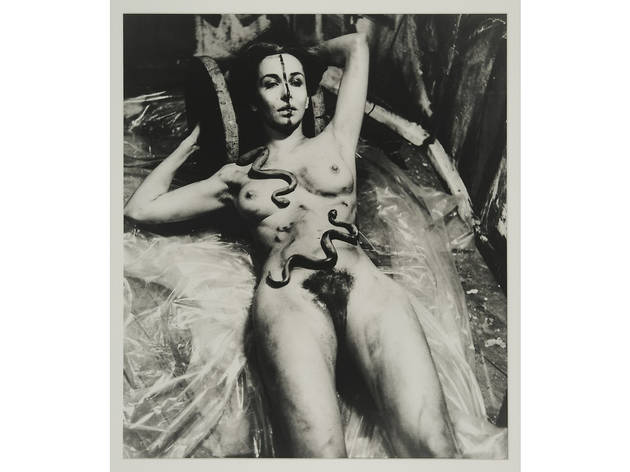 “Coming to Power: 25 Years of Sexually X-Plicit Art By Women”

This show surveys sexually explicit art by women from the 1970s to the 1990s, a period that saw fluctuating relationships between pornography and feminism. 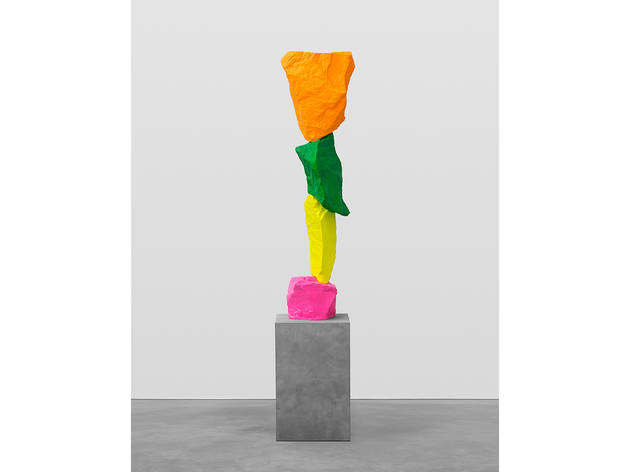 “Ugo Rondinone: the sun at 4pm”

Our response to nature is examined in four sculpture series named for natural elements: “mountain,” “sun,” “waterfall” and “cloud.” Among them are stacks of brightly-colored rocks recalling wind-swept sandstone formations in the Western desert.

Looking for some free art, culture vultures? Thought so. Which is why we found a bunch of gratis art showsat galleries and museums in NYC that won’t cost you a cent. Visit well-known institutions like the Pace Galleryand David Zwirner and still have money in your pocket for lunch at one of the best restaurants in NYC.

RECOMMENDED: See the full guide to free things to do in NYC 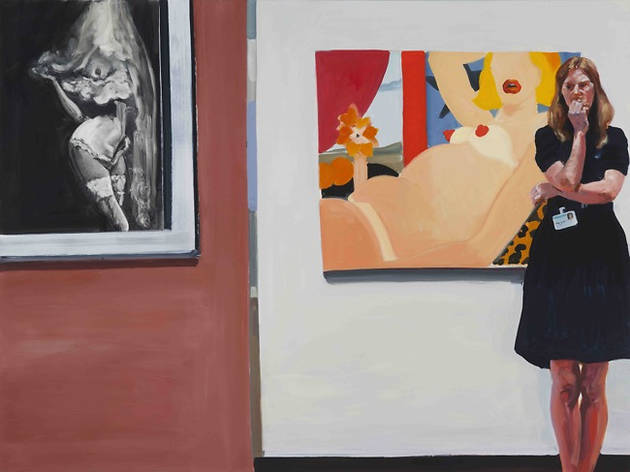 As if people needed reminding, Eric Fischl’s latest paintings probe the vast disconnect between the art world and the real world. The centerpiece painting here is a diptych juxtaposing a scene of one-percenters checking their phones at an art fair with one of Syrian refugees washing ashore: A bit blunt, but true enough. 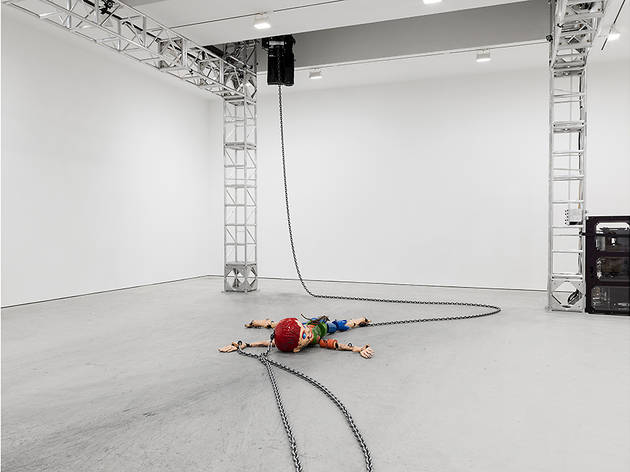 At this point there have been so many practitioners of bad-boy art that it arguably constitutes its own genre—and judging from its embrace by collectors, the style is possibly the most important one, sort of like history painting in the 19th century. Bad-boy art is conceivably unique in its ability to attract the funding necessary for off-the-charts spectacles, with Jordan Wolfson’s show being a prime example. Wolfson’s work checks all the boxes of transgressive attitude, including a willingness to launder good taste in a tub of abjection. Here, a gap-toothed, grimacing marionette resembling a mix of Howdy Doody and Alfred E. Neuman has been scaled up to the size of a Porsche Cayenne. This oversize fantoccini is dangling by chains from an overhead gantry programmed to mop it around the floor, leaving scuff marks on its face and body. Guided by facial-recognition software, its eyes follow you around the room, fixing you with a purgatorial gaze suspended between pain and pleasure. You’re tempted to think of Abu Ghraib until loudspeakers began to blare “When a Man Loves a Woman” as the figure is bashed repeatedly on the floor. Turns out this boy isn’t bad so much as he is vulnerable. 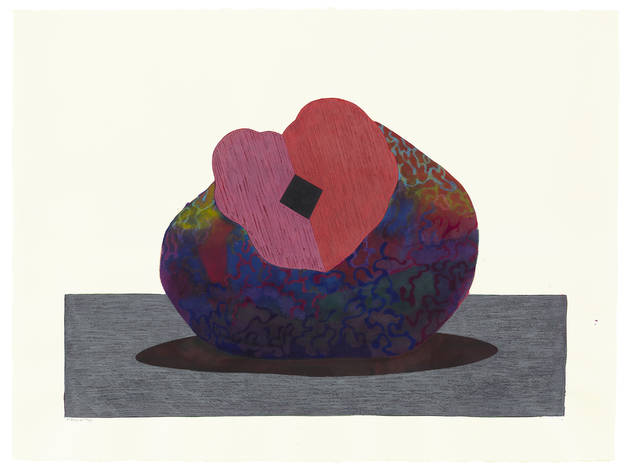 Price is known as a Left-Coast master of ceramic objects whose bright, iridescent glazes and unconventional shapes evoke the mental and physical landscape of Los Angeles. The same could be said for these exquisite works on paper. Made with acrylic and ink, they depict studies for his sculptures as well as interior and exterior scenes suffused with  L.A. sunshine noir.

Magnus (1952–2013), a Pittsburgh native who spent his career working in Ohio, was a potter who earned an international reputation for objects that combined inventive imagistic forms with colorful glazes that ran a wide gamut of finishes and techniques. His work drew upon myriad influences, including cave art, modernist abstraction, folk art and Japanese prints, as well as Meso-American and Asian ceramic traditions. He was a regional artist with a worldwide profile—though, surprisingly, not well that well known here. This show, his first in New York, offers a taste of what we’ve been missing.